Skip to content
Cart
We will be closed Wednesday, November 23rd - Sunday, November 27th. Have a happy holiday!
Huge Cleary Bicycle Sale SAVE 20% Just in time for the holidays
We have a new online booking software Click Here To Schedule Your Service Appointment

Did you know a tandem bicycle world record was set right here in Philadelphia, or that the first song ever sung by a computer was "Bicycle Built for Two"? Keep reading because the history of the most romantic bicycle is a lot more interesting than you would expect. This photo shows Gordon Jones and Billy read who together set a record for crossing Australia by bike riding from Pert to Sydney in just under 23 days. (From the Hood Collection at the State Library of New South Wales)

Let's first define what a tandem bicycle is. "Tandem" refers to the fore and aft position of the riders, as opposed to side by side. The person in front is called the "pilot", "captain", or "steersman" while the person in back is called the "stoker", "navigator" or "rear admiral". Most tandems require both riders to pedal at the same time or match their cadences. Tandems are at minimum ridden by two people but bikes with even more riders are still called "tandems".

This is not a tandem, but a "Sociable", referring to the side by side saddles. ("Man and woman on a Malvern Star abreast tandem bicycle", c. 1930s, by Sam Hood)

The tandem as we know it today was patented in 1898 and called a "Pedersen Bicycle" after its creator. It weighed 24 pounds.

(The original Pedersen, image from The Military Bicycle Museum) 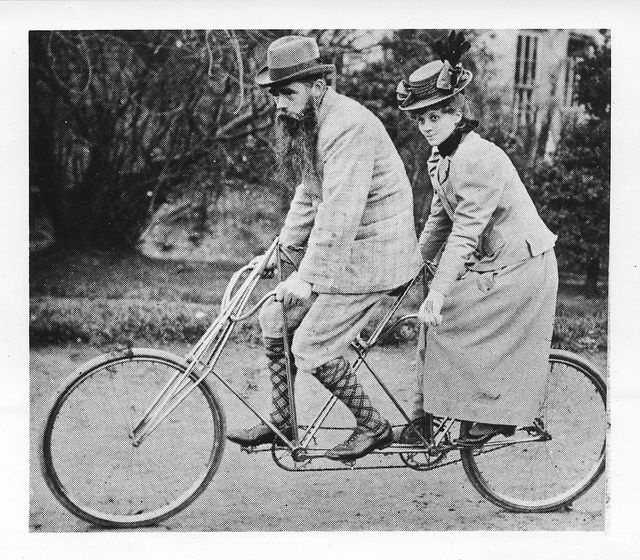 (Mr. and Mrs. Pedersen on one of their tandems) In approximately 1892 Harry Dacre wrote "Daisy Bell (Bicycle Built for Two)" which became a worldwide hit. In 1961, an IBM computer was the first to ever simulate a human voice. The recording was referenced in Stanley Kubrick's "2001: A Space Odyssey" as HAL sings "Daisy Bell" during its ultimate deactivation.

"Daisy, Daisy give me your heart to do
I'm half crazy, hopeful in love with you
It won't be a stylish marriage
I can't afford the carriage
But you look sweet upon the street
On a bicycle built for two
We will go tandem as man and wife
Daisy, Daisy
Peddling our way down the road of life
I and my daisy bell
When the roads and we both despise
Please men the lambs as well
There are bright lights in those dazzling ice
A beautiful daisy bell"

Here it is performed by Nat King Cole:

And here it is performed by an IBM 7090 computer in 1961; the first ever synthetic "human" voice:

Tandem bikes had some other practical uses as well. The below photo shows German soldiers using a tandem bicycle generator to power a light radio station on from the battlefield in 1917. The "War Cycle" was used in the Anglo-Boer War in South Africa. It was capable of speeds over 48 kmh and could be fitted with a Maxim gun. In 1981 a record was set in Philadelphia for the World's Longest Tandem Bicycle. Here is a video showing the masterpiece with some great footage of 80's Philly:

Phildelphia is still contributing to the tandem scene. Bilenky Cycle Works builds unique touring, recumbent, and travel tandems with S&S couplers. Below is the Bilenky "Viewpoint" "Tandem Technology" has come a long way since 1898. Nowadays, tandem bikes are designed to be lightweight, capable, racing machines and highly-efficient touring bikes.

Happy Valentine's Day to all the pilots and stokers.  <3 (From "The Wheel" at The Internet Archive)

Do you already ride a tandem? Have an addition or correction? Comment below.